U.S. Government Propaganda in the War on Terror 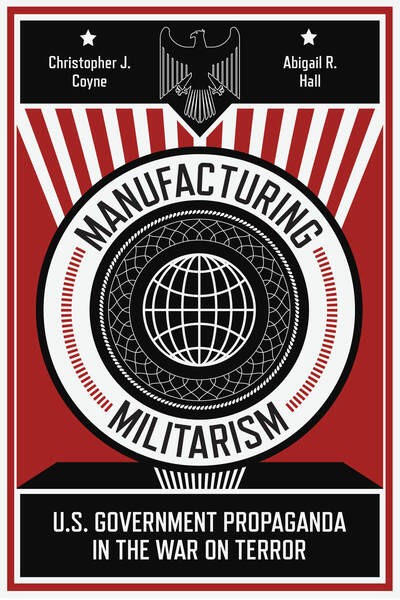 The U.S. government's prime enemy in the War on Terror is not a shadowy mastermind dispatching suicide bombers. It is the informed American citizen.

With Manufacturing Militarism, Christopher J. Coyne and Abigail R. Hall detail how military propaganda has targeted Americans since 9/11. From the darkened cinema to the football field to the airport screening line, the U.S. government has purposefully inflated the actual threat of terrorism and the necessity of a proactive military response. This biased, incomplete, and misleading information contributes to a broader culture of fear and militarism that, far from keeping Americans safe, ultimately threatens the foundations of a free society.

Applying a political economic approach to the incentives created by a democratic system with a massive national security state, Coyne and Hall delve into case studies from the War on Terror to show how propaganda operates in a democracy. As they vigilantly watch their carry-ons scanned at the airport despite nonexistent threats, or absorb glowing representations of the military from films, Americans are subject to propaganda that, Coyne and Hall argue, erodes government by citizen consent.

Order the book now on Amazon.