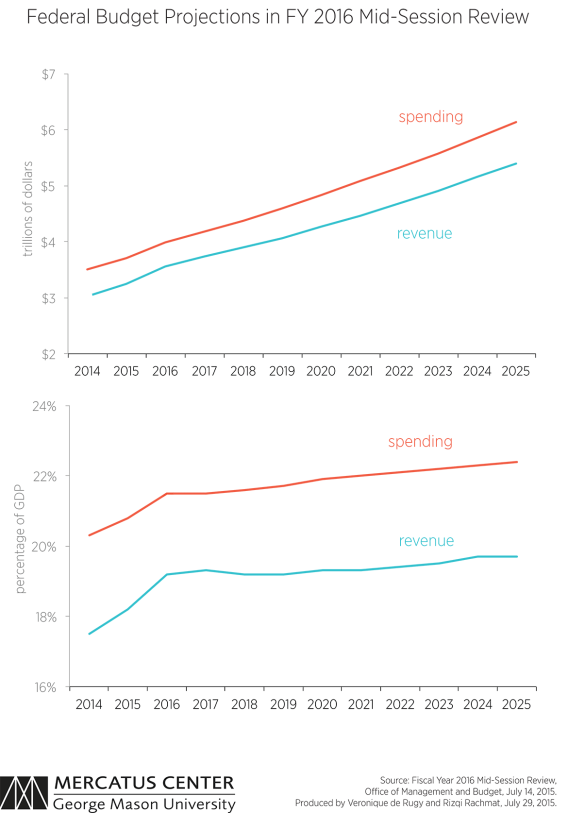 The Office of Management and Budget recently released the Obama administration’s fiscal year (FY) 2016 mid-session budget review (MSR). The MSR is an annual update of the president’s initial budget proposal that incorporates subsequent changes in policy and the underlying economic assumptions used in forecasting the budget’s future path. I reviewed the president’s budget proposal when it was released in February and the updated figures show that the story remains the same: the White House envisions more tax revenues and higher levels of spending. By pursuing an agenda that essentially ignores the government’s long-term budget problems and instead encourages further expansion, the president is doing a disservice to the interests of future Americans, who would  bear the brunt of the economic fallout under the current fiscal trajectory. While it is expected that the Republican-controlled Congress is unlikely to go along with the president’s tax-and-spend agenda, unfortunately, the GOP has yet to demonstrate that it’s truly serious about addressing the federal government’s bleak budget picture either.

Are the Costs of Government on “Autopilot”?

Taxes and the costs of complying with regulation are two of the larger and more noticeable ways that private individuals pay for government services. Yet it may surprise most people to learn that a significant portion of the federal government’s expenditures and indirect costs to the US economy occur each year on “autopilot” without any action by the current Congress. These autopilot costs are annual expenditures from past legislation, interest payments, and regulations created by government agencies. 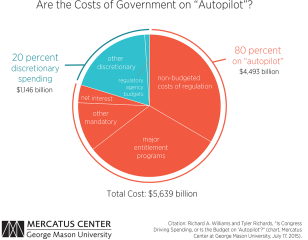 My three-part message today is this. First, Congress should treat the budget process as a means, not an end, and enact reforms accordingly. Second, given the fiscal challenges facing the country, now is not the time for minor tweaking. Instead, now is the time to think big and craft a process that drives legislators to produce credible and sustainable fiscal policy by constraining federal spending both today and tomorrow. Third, any reform should include effective enforcement mechanisms, preferably constitutional in nature, to prevent the new process from suffering the same fate as the current one.

No adjustment that sufficiently addresses the US government’s enormous fiscal gap will be small, but delaying the adjustment only increases the magnitude of the burden and shifts more of it onto future generations.

While the president’s budget proposal is unlikely to go anywhere because Republicans control Congress, it doesn’t change the underlying reality that the long-term budget picture remains bleak because spending will outstrip revenues unless policymakers change course. That means cutting the size and scope of the federal government—not increasing taxes. 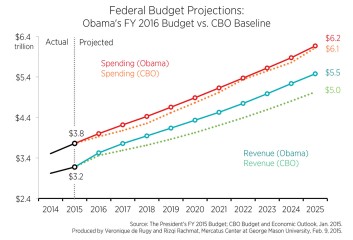