This year’s Nobel Committee made a worthy selection for the economic profession’s highest honor. Richard Thaler is an economic provocateur; confident yet jovial in his efforts to entice and inspire an often-stubborn discipline to incorporate realistic expectations about human behavior into their work.

Among other things, Thaler is known for advancing “nudge theory,” i.e., using government to entice people into making better choices — and, more broadly, for embracing the role of policy in correcting market failures.

Yet, as with any provocateur, there are tensions in his work. Most notably, do error-prone individuals really doom the market economy?

In the fall of 1991, Ronald H. Coase won the Nobel Prize for his work on transaction cost economics, which included a theorem that clear property rights and ease of trade lead to efficient markets. Thaler, meanwhile, presented an early version of an experimental study at NYU.

He observed that Cornell University undergrads valued mugs from the campus bookstore more once they owned them and argued that this “endowment effect” demonstrated that market transactions do not, in fact, lead to efficient outcomes. He concluded, with a smile and a laugh, that Coase’s theorem was completely wrong.

During that talk, he also discussed the retirement account decisions of economic professors, who held too much in annuities and not enough in equities. How silly we economists are, Thaler goaded: We all know that stocks outperform bonds over any 20-year period, yet we do not act on that knowledge.

Even economic professors were overly risk averse. Of all people, they should have been capable of making better-informed decisions. He simultaneously annoyed, intrigued and compelled his audience to pay attention to his work.

During the 1990s, he had a regular column in the Journal of Economic Perspectives, where he detailed stories of anomalous behavior.

Some of the anomalies he uncovered include the “winner’s curse,” showing that winners value winning more than the cost of prizes; how stock prices tend to increase in January and how investors are incredibly risk averse; to name a few.

His most recent book, “Misbehaving,” provides a tour through a brilliant career attempting to awaken colleagues from an intellectual slumber imposed by methodological groupthink and comforting textbook presentations.

Thaler’s work demonstrates the flaws in individual decisionmaking, as well as the implications for long-held presumptions about the market economy. His experimental work, most notably with Daniel Kahneman, details irrationalities in individual choice. His work with Cass Sunstein explores the policy implications of this understanding.

However, moving from individual choice to societal implications cannot be done without understanding the institutional incentives and constraints at play in our daily interactions. In short, what do our individual flaws really mean for the market economy?

In fact, their research shows that fallible-but-capable human choosers drive progress. For it is only through errors, missed opportunities and constant change that entrepreneurs can identify solutions.

Through this process, individuals discover new opportunities, new innovations in technology and new organizational structures within firms. None of the work by these economists relied on an ideal version of rationality. Intelligence must not solely rest on the individual, but in the lessons we learn as a society.

To be fair, Thaler’s work doesn’t always lean toward government as the sole cure for market failure, as, for example, many proponents of nudge theory would suggest. He is more subtle than that.

Is Thaler trying to help us understand the agony of individual choice in a world of societal and cultural uncertainty? Take his work in, "Quasi-Rational Economics" and the humility of “Misbehaving.” Such thoughtful provocation enables economists to loosen their grip on the assumption of perfect rationality in favor of a more nuanced approach.

Or is he seeking to develop a benchmark for human decisionmaking in the abstract, against which actual individual decisions are to be judged? His rubric for determining if people are rational or irrational often concludes with a call for governments to nudge citizens to behave rationally, thus downplaying the complexities of real-world institutions.

Upon winning the prize, Thaler stressed that his work demonstrates how decision-making is done by human beings and that this must be incorporated back into our economic models. We wholeheartedly agree with him.

Good economics begins with a scientific study of the rational choices that real people make and requires us to remember that history matters.

As Hayek wrote in his own Nobel lecture, we dishonor this scientific tradition when we lack humility and hold firm to formal models that don’t represent reality. In such a world, the students of civilization transform into tyrants over their fellow man.

We hope that Thaler, in the months that follow, continues to prod at the stubborn discipline of economics by following in the footsteps of such Nobel laureates before him.

The Nobel Memorial Prize in Economic Sciences went to Richard Thaler on Monday to honor his scholarly heresy. His work

Why Conservatives Should Celebrate Thaler's Nobel

His "nudge" theory is often lauded by liberals, but its use is widespread on the right. 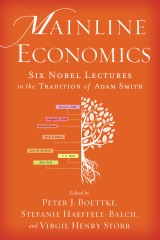