Equality, Liberty, and the Quest for Human Dignity

Published by The Independent Institute 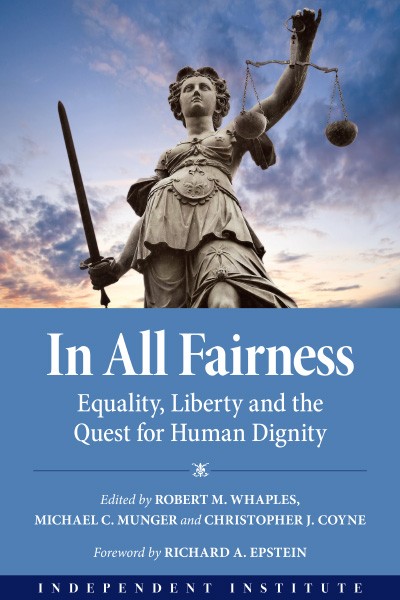 Growing concern about inequality has led to proposals to remake American society according to ill-conceived and coercive “egalitarian” values that are fundamentally unfair.

This unique book reveals the modern romance with equality as a destructive flirtation. The elites who advocate such notions claim they champion the poor—but more often than not the nostrums of this managerial class undermine, rather than advance, mass prosperity and human well-being.

The authors of In All Fairness challenge all of the prevailing egalitarian ideas, including the claim that the country is riven by inequality in the first place. After all, our economy thrives with a division of labor that allows individuals who are unequal in interests and talents to pursue their own unique goals. Looked at in this way, equality is far more widespread than overheated rhetoric might lead one to expect—as factual data show.

But it is an equality of a particularly valuable type—one arrived at, not by top-down attempts to impose economic uniformity, but by our respecting inviolable rules of fair play and the dignity of each person, a dignity that requires everyone to respect the voluntary transactions of others. This approach holds equity, liberty, diversity, and prosperity together. Would we want it any other way in America and anywhere around the world?

The authors draw on economics, philosophy, religion, law, political science, and history to provide answers to a perennial question that especially agitates the American public today: Can the coercive powers of the state be used to achieve a kind of arithmetic equality? The authors, each in their own way, make a strong case that they should not be used in this fashion.

Love inequality or loathe it, In All Fairness is full of key insights about the connections among fairness, liberty, equality and the quest for human dignity. You won’t think about wealth and poverty, equality and inequality, in the same way ever again.