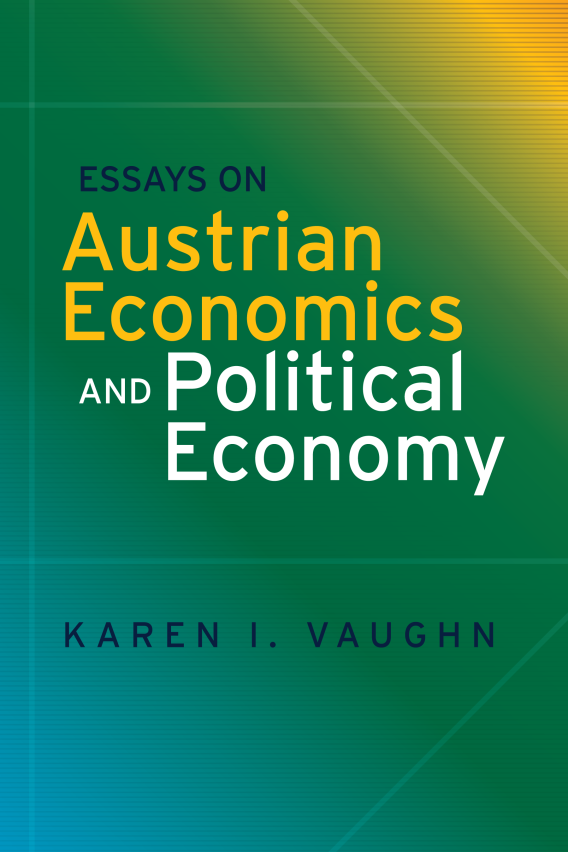 In Essays on Austrian Economics and Political Economy, Karen I. Vaughn takes us through her intellectual journey and career. As a neoclassical economist by training and a specialist in the history of economic thought, Vaughn, although conversant with the Austrian school of economics, did not fully begin to grasp the fundamental differences between the neoclassical and Austrian schools until 1974, when she attended the South Royalton Conference on Austrian Economics organized by the Institute for Humane Studies. This conference sparked her interest in researching core issues in Austrian economics and political economy. She went on to shape the field through her research and intellectual entrepreneurship.

This volume collects various explorations of these ideas throughout her career, including wrestling with the concept of equilibrium through the lenses of Kirzner and Lachmann and building upon Hayek’s work by applying systems theory to economics and considering the future of Austrian economics. It is ideal for scholars and students interested in the history and continued advancement of Austrian economics and political economy.

“Karen Vaughn has consistently been not only a scholar of unique clarity in exposition, but one of the wisest scholars in unearthing the insights of Carl Menger, F. A. Hayek, and James Buchanan. An outstanding teacher and academic leader of great skill, the contemporary Austrian school of economics as well as Virginia Political Economy owe much to her hard work and dedication to that advancement of scholarship. This collection provides a window into her brilliance, as well as the sheer sense of intellectual pleasure she has in figuring things out. Join her on the adventure.”
—Peter J. Boettke, University Professor of Economics and Philosophy, George Mason University; Author of The Struggle for a Better World

“The volume collects Karen Vaughn’s manifold writings on the history and theory of Austrian economics and includes an informative introduction in which she describes her intellectual journey. The book is an important contribution to the literature on the development of Austrian economics in the late twentieth century by one of its leading figures.”
—Bruce Caldwell, Research Professor of Economics and Director, Center for the History of Political Economy, Duke University; Author of Hayek’s Challenge

“The qualities which shine throughout this superb collection of Karen Vaughn’s scholarly papers –vibrant, irrepressible intellectual curiosity, and incorruptible intellectual integrity—are the very qualities which have made their author the deeply respected senior scholar that she is.”
—Israel M. Kirzner, Professor Emeritus of Economics, New York University; Author of The Collected Works of Israel M. Kirzner

“Karen I. Vaughn has made important contributions to the development of Austrian economics over many decades. These essays reveal the depth and breadth of her work. Younger Austrian economists, especially, should acquaint themselves with this work. There is so much to be learned from it.”
—Mario J. Rizzo, Associate Professor of Economics and Director, Foundations of the Market Economy Program, New York University; Author of Escaping Paternalism

“Reading this collection of Essays on Austrian Economics and Political Economy convinces me that Karen I. Vaughn must have one of the highest ratios of meaningful to total verbiage of any economist currently practicing the craft. All the essays reprinted here are interesting and insightful, some of them exceedingly so. Someone interested in developing their understanding of the Austrian tradition in economics will learn much from perusing these essays. Someone interested only in testing themselves against an insightful theoretical adversary will likewise learn much. The Mercatus Center is to be congratulated for sponsoring this luminous collection.”
—Richard E. Wagner, Hobart R. Harris Professor of Economics, George Mason University; Author of Macroeconomics as Systems Theory

“The essays collected in this volume reflect Karen I. Vaughn’s understanding of Austrian economics as—in her words—“a progressive research program” that applies to a broad range of theoretical and policy issues. What gives coherence to the collection—and makes for stimulating reading—is her constant emphasis on the explanatory role the Austrian approach assigns to the limits and diversity of human knowledge, to creativity and learning, and to evolutionary change leading into an open-ended future. Vaughn’s contributions illustrate how, by employing these core ingredients, the Austrian tradition can indeed activate its potential as a progressive research program.”
—Viktor J. Vanberg, senior research fellow, Walter Eucken Institut; Author of Individual Choice and Social Welfare

Introduction: How I Became an Austrian Economist

Chapter 1: Economic Calculation under Socialism: The Austrian Contribution
Chapter 2: Does it Matter That Costs Are Subjective?
Chapter 3: Hayek's Ricardo Effect: A Second Look with Laurence Moss
Chapter 4: Profit, Alertness, and Imagination
Chapter 5: The Mengerian Roots of the Austrian Revival
Chapter 6: The Problem of Order in Austrian Economics: Kirzner vs. Lachmann
Chapter 7: Should There Be an Austrian Welfare Economics?
Chapter 8: Hayek's Implicit Economics: Rules and the Problem of Order
Chapter 9: Hayek's Theory of the Market Order as an Instance of the Theory of Complex, Adaptive Systems

Chapter 10: Can Democratic Society Reform Itself? The Limits of Constructive Change
Chapter 11: The Constitution of Liberty from an Evolutionary Perspective
Chapter 12: The Limits of Homo Economicus in Public Choice and in Political Philosophy
Chapter 13: Friedrich Hayek's Defense of the Market Order

Chapter 14: Why Teach the History of Economics?
Chapter 15: Economic Policy for an Imperfect World
Chapter 16: Does Austrian Economics Have a Useful Future?