In Search of Monsters to Destroy

The Folly of American Empire and the Paths to Peace 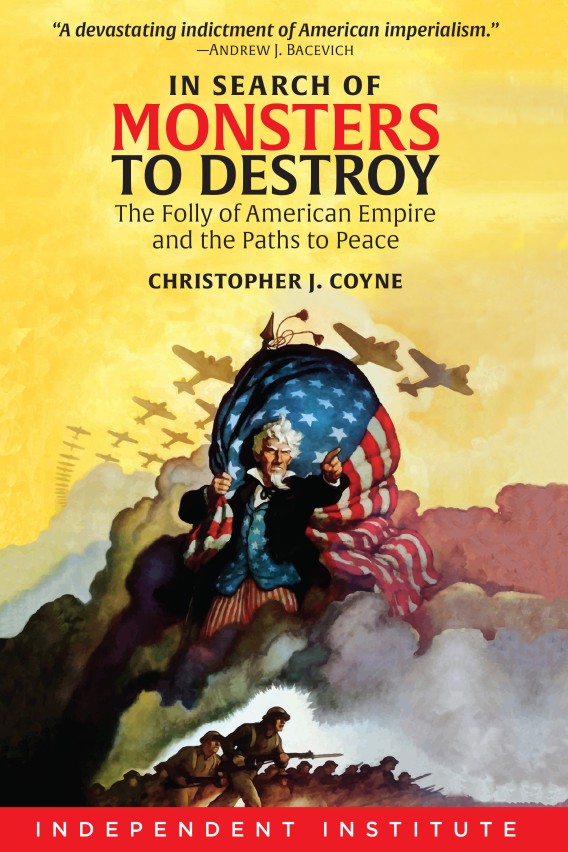 So says Christopher Coyne, Senior Fellow at the Independent Institute and Professor of Economics at George Mason University, in this eye-opening, must-read book on America's recent foreign policy failures.

After 9/11, the United States tried to establish liberal political regimes in the Middle East and in the mountains of Afghanistan—but the effort, according to Coyne, was doomed to fail. And his logic is simple.

Illiberal means, such as:

can lead only to illiberal ends. What else are the hundreds of thousands of dead and mutilated civilians the US left behind in the Middle East and Central Asia? What else are the destroyed ancient cultures and nearly obliterated nation-states? Coyne also points out that the illiberal perpetrators can end up nearly bankrupt and humiliated in the process—and profoundly less secure.

Sound familiar? Coyne insists that, if we do not absorb these truths, the rest of the 21st-century will be a repeat of its bloodstained, unstable beginning.

But Coyne is no isolationist.

He insists there are workable, proven alternatives to imperialism, militarism, and empire—ones that preserve freedom, promote security, and foster mutually enriching friendship among the nations of the earth. These alternatives stand in stark and admirable opposition to our current militaristic culture, proving that nonviolent approaches to domestic and international conflicts not only minimize violence, but also promote cultures of peace throughout the world.

Read In Search of Monsters to Destroy, and you'll never look at the nation state or international relations the same again.

“With In Search of Monsters to Destroy, Christopher Coyne offers readers a crisp, concise, and devastating indictment of American imperialism. His provocative proposal for a nonviolent ‘polycentric’ approach to national security comes as a welcome bonus.”
—Andrew J. Bacevich, President and Chairman of the Board, Quincy Institute for Responsible Statecraft; Professor Emeritus of International Relations and History, Boston University

“Why go overseas to slay monsters? Whether it’s corruption and cronyism, bureaucratic pathologies and perverse policies, mechanized terror and murderous militarism, the monsters are right here, America. Luckily for us, in In Search of Monsters to Destroy, Coyne faces them down with courage and clarity. So should we.”
—William J. Astore, Lt. Col., USAF (Ret.), author, Hindenburg: Icon of German Militarism

“Christopher Coyne has long been the leading voice in economics on the folly of American military interventions overseas. In his remarkable new book, In Search of Monsters to Destroy, he gives unpopular but deeply compelling arguments why such interventions are a threat to liberal values both at home and abroad.”
—William R. Easterly, Co-Director, Development Research Institute, New York University

“Coyne argues in his tightly written examination of America’s global meddling, In Search of Monsters to Destroy, that these interventions almost inevitably cause more harm than good because America lacks both the interest and knowledge to do otherwise. It is not ‘Mission Accomplished’ but ‘Mission Impossible’.”
—Harvey M. Sapolsky, Professor Emeritus of Public Policy and Organization and former Director of the MIT Security Studies Program, Massachusetts Institute of Technology

“Christopher Coyne’s In Search of Monsters to Destroy is a timely book. Completed on the heels of the undeniable failure of America’s longest war in Afghanistan it comes out in the midst of the United States’ and NATO’s dangerous effort to destroy yet another monster, this time the Russian bear in Ukraine. Sadly, we continue to need Coyne’s reminder of the folly of even well-intentioned empire and the urgency for a new, non-imperial approach to national and international security.”
—Michael C. Desch, Packey J. Dee Professor of International Relations and Brian and Jeannelle Brady Family Director, Notre Dame International Security Center, University of Notre Dame

“In Search of Monsters to Destroy is a bold necessary book that examines the costs and failures of U.S. military interventions in Afghanistan, Iraq, Libya and beyond. The book also offers solutions, outlining alternative, polycentric defense strategies, including civil resistance, that promise greater security at less risk of war. A well-written compact volume that makes a valuable contribution to the debate on national-security strategy and the need for military restraint.”
—David Cortright, Director of Policy Studies, Kroc Institute for International Peace Studies, Keough School of Global Affairs, University of Notre Dame

“Christopher Coyne’s very important and timely book, In Search of Monsters to Destroy, reminds us once again that all wars bring taxes and the expansion of the power and scope of government. When the wars end, the taxes remain. The new powers remain. The new additional government functionaries remain. State power ratchets upwards and rarely back down. War is truly the health of the state.”
—Grover G. Norquist, Founder and President, Americans for Tax Reform

“With his book In Search of Monsters to Destroy, Coyne uses key insights from political economy to deliver a major broadside against interventionist American foreign policies. He argues that we have unproductively adopted an imperial approach that undermines both liberal ends and our security needs. Agree or disagree with his analysis or recommendations, readers will find Coyne’s challenges to traditional approaches well worth pondering.”
—William P. Ruger, President, American Institute for Economic Research

“In Search of Monsters to Destroy presents a detailed and tellingly accurate anatomy of the American warfare state and its consequences for both the United States and other nations before laying out a thought-provoking case for an alternative to Washington’s current, counterproductive militarism.”
—Charles W. Freeman, Jr., President Emeritus, Middle East Policy Council; former U.S. Ambassador to Saudi Arabia; former Assistant U.S. Secretary of Defense for International Security Affairs