Over the past 10 years, Boeing has received more support from the Export-Import Bank than any other business and more than all small businesses in the United States combined.

From fiscal year (FY) 2007 through FY 2017, 34 percent of all aid provided by the Export-Import (Ex-Im) Bank went to just one exporter: Boeing. This makes Boeing the single largest beneficiary of Ex-Im Bank support. For comparison, all small business authorizations combined in this 10-year period totaled only 22 percent of Ex-Im Bank aid.

The US Export-Import Bank (Ex-Im) has been called “Boeing’s Bank” because of the overwhelming benefits that the aerospace conglomerate has received from the federal export credit agency over the years. This week’s charts, which were created using figures from Ex-Im’s 2014 annual report, show that Boeing remains the primary beneficiary of the bank’s taxpayer-backed financing. 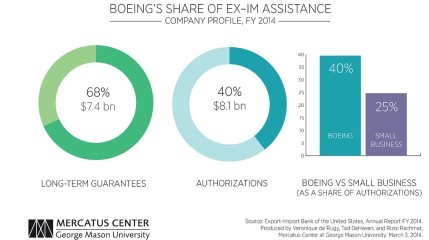