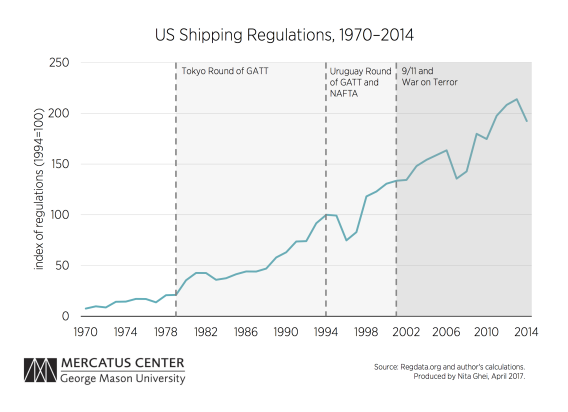 The Merchant Marine Act of 1920, also known as the Jones Act, forms the basis of much of existing regulation of the US shipping industry. The Passenger Vessel Safety Act of 1993 (PVSA) and similar legislation have also contributed to increases in regulation of the industry, which is administered by an alphabet soup of federal agencies. The Jones Act requires vessels carrying cargo between US ports to be US built, at least 75 percent US owned, US flagged (that is, registered in the United States), and at least 75 percent US crewed. The PVSA has similar requirements. The express purpose of these restrictions is to maintain a strong merchant marine for national security—the US shipbuilding industry would be preserved for times of war and Jones Act vessels could serve as a naval auxiliary, if needed.

There is little reason to believe that the Jones Act achieves this goal. Instead, the growing thicket of regulations increases costs for American consumers and American businesses, and it results in lost opportunities for American businesses. These effects are particularly severe for the noncontiguous states of Hawaii and Alaska and the territory of Puerto Rico. The high cost of Jones Act vessels has resulted in several bulk products, like animal feed and jet fuel, being imported to Puerto Rico from South America rather than from closer sources in the continental United States; lower income for the lumber industry in Alaska; and the odd situation where ranchers in Hawaii consider flying cattle in Boeing 747s to be a reasonable alternative to shipping them. Worse, the Jones Act can hinder the arrival of essential disaster relief supplies—as in the wake of Hurricane Sandy, which resulted in President Obama temporarily suspending the law’s requirements.

One way to estimate regulatory restrictions is provided by RegData—a text analysis computer program capable of scanning extensive legal text—developed by researchers at the Mercatus Center at George Mason University. RegData allows identification of regulations relevant to the shipping industry by connecting relevant keywords with restriction counts. Restrictions are words and phrases like “shall,” “must,” “may not,” “prohibited,” and “required” that signal legal constraints and obligations. The chart plots the number of restrictions reduced to an index normalized to equal 100 in 1994, the year when the North American Free Trade Agreement (NAFTA) went into effect and the treaty of the Uruguay Round of the General Agreement on Tariffs and Trade (GATT) was signed. In the table, average rates of growth for specific periods of growth refer to the period of the event and the year following.

Restrictions on the shipping industry have grown from just over 27,000 words and phrases in 1970 to over 761,000 by 2014. The number of restrictions grew from just over 300 to almost 8,000 in the same time period, an increase of over 2,400 percent. The growth has been uneven, with greater spurts in certain time periods. The ratification of trade treaties that lowered barriers to trade overall seems to be positively associated with increases in restrictions on the shipping industry, with significant jumps at the end of the Tokyo Round of the GATT in 1979 (over 30 percent) and in 1994 at the time of ratification of NAFTA and the end of the Uruguay Round of the GATT (in the range of 15 percent). These findings are consistent with efforts by US trade negotiators to protect the Jones Act from being included in multilateral trade agreements.

The growth of regulations slowed significantly in the wake of 9/11 (2001–2008), remaining well below 9 percent, which was the annual average for the period of 1970–2014. While there have been years when restrictions have decreased, the sole multiyear period of declining restrictions was 1995–1997, a period associated with a rollback of regulations in general.

These regulations provide the domestic shipping industry with significant protection from foreign competition—but that is not all this regulation accomplishes. The burden of complying with the bewildering array of regulations also keeps new market entrants from competing with existing firms. This decreases the incentive for existing firms to innovate to lower costs, hampering the US shipping industry’s ability to remain competitive in global markets.

Furthermore, there is little evidence to suggest that the Jones Act and similar burdensome legislation enhance national security—which is an express goal of protecting the domestic shipbuilding industry. US shipbuilders are notorious for not just high costs generally, but also for long delays and huge cost overruns on naval ships.

The Jones Act, and the vast array of regulations to enforce the statute, increase waterborne transportation costs, resulting in higher costs for American consumers and lost opportunities for American businesses—all with questionable success in achieving the law’s goal of improving national security.

An Economic Analysis of the Jones Act

Repealing the Jones Act in its entirety would provide the greatest economic benefits. However, a more moderate reform with strong economic justification would be to allow foreign-built oceangoing ships on routes involving the noncontiguous regions of the United States.