One can hardly turn on a TV without seeing commercials in which cash-strapped individuals bring their car titles to a lender for quick and easy loans. While auto title lending may appear to be 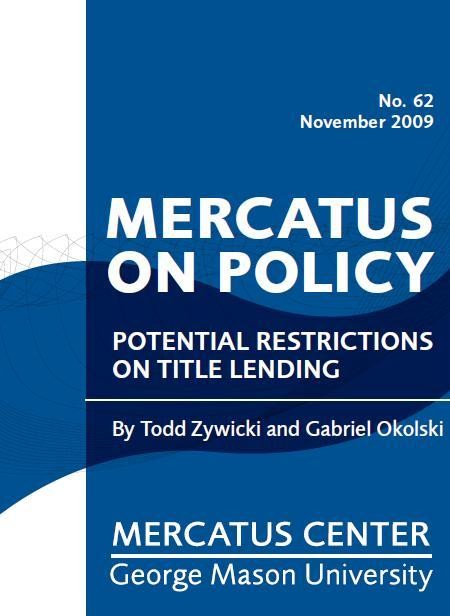 One can hardly turn on a TV without seeing commercials in which cash-strapped individuals bring their car titles to a lender for quick and easy loans. While auto title lending may appear to be somewhat sketchy, it is actually a relatively safe and important source of credit for many Americans. However, current state legislation and a proposed federal rule seek to restrict this practice, with the very aim of protecting borrowers. This misguided paternalism will instead cut many people off from much-needed cash, encourage other, more dangerous lending practices, and potentially lead to other detrimental outcomes such as bounced checks or bankruptcy.

Auto title lending grew out of traditional pawn shop operations, allowing borrowers to obtain larger loans by using one of their most valuable assets as collateral. The amount of a car title loan varies; though some studies have found that lenders typically lend about 33 percent of the resale value of the automobile,1 others have documented loans of 50 to 100 percent of the car's value.2 Most loans range from $250 to $1,000, although some are larger.3 This compares very favorably to a typical pawnbroker loan, for which the average value is $70.4 And unlike pawnbroker loans, the borrower is able to keep the asset against which she is borrowing.

Auto title loans also have highly transparent and easily understood pricing schemes. The only price point is the interest rate, and these loans generally do not involve up-front fees or prepayment charges. The Annual Percentage Rate (APR) on a title loan is typically 120–300 percent, depending on the amount borrowed.5 And while the borrower loses her vehicle in the case of default, the loan is usually non-recourse past that point, meaning that the borrower is not personally responsible for the debt. For example, if the car is not in operating condition because of a mechanical breakdown or is resold for less than expected, the lender is still limited to repossession and cannot sue the borrower for any deficiency.

WHO IS USING TITLE LENDING?

Auto title loans fall under the category of non-traditional lending products, which appeal to individuals who may not be able to obtain more formal lending products or need to obtain emergency cash quickly. Perhaps contrary to popular intuition, some title lending is used by moderate-income earners who have enough wealth to own a car of sufficiently high value but who also have impaired credit.

According to the American Association of Responsible Auto Lenders, the typical title loan customer for its members is 44 years old and has a household income of more than $50,000 per year, but is excluded from traditional lenders such as credit card companies, banks, credit unions, and small loan companies. In addition to these moderate-income borrowers, title loans also cater to lower-income consumers. A 1999 study analyzing data from the Illinois Title Loan Company found that 37.6 percent of title loan customers earn less than $30,000 per year, compared to 45.9 percent who earn more than $40,000 per year. Additionally, approximately 46 percent of borrowers are repeat customers, and the average loan duration is between three-and-a-half to four-and-a-half months.6

In addition to consumers outside of the traditional lending channels, small, independent businesses rely on auto title loans as an important source of short-term working capital. For example, a landscaping company may need several hundred dollars to purchase sod or bushes for a job or to meet payroll expenses. The proprietor may pledge his pickup truck to obtain the necessary capital to buy the supplies to complete the job. Then when the job is complete, the businessman receives payment and can redeem the collateral.

While borrowing against one's car may seem to be an inherently dangerous practice, actual experiences with auto title lending have proven it to be a relatively reliable and stable lending tool. Far from preying on low-income borrowers who are unable to pay the loans back, title lenders seem to be catering to a group of rational consumers who use this method as a means to obtain needed credit because theirs has become impaired.

For consumers who rely on these loans for essential needs, the risks of outlawing title lending may outweigh the rewards. Although there is limited research on why consumers use title lending, research on other non-traditional lending products (such as payday lending) is informative. A 2007 study found that 43 percent of payday loan customers had overdrawn their checking accounts at least once in the previous 12 months7 and primarily used funds for "bills, emergencies, food and groceries, and other debt service."8 Research by two Federal Reserve economists found that when Georgia and North Carolina outlawed payday lending, the incidences of bounced checks, consumer complaints about debt collectors, and chapter 7 bankruptcy filings rose.9 Bounced checks and bankruptcy can be extremely detrimental to one's credit and can carry higher costs than non-traditional lending products. Legislative bans on these lending options exchange a more-stable lending practice for practices that hurt low-income consumers.

Industry sources report that about 14 to 17 percent of title loans default but that only about half of those (8 percent overall) result in vehicle repossession.10 This high percentage of defaults that do not lead to repossession reflects the reality that many of the cars used as collateral tend to be older vehicles that often become damaged or break down over the course of the loan, limiting the incentives to expend the cost of repossession. Furthermore, according to the American Association of Responsible Auto Lenders, more than 70 percent of its customers own two or more vehicles, making repossession more of an inconvenience than a disaster.

Congress is considering two pieces of legislation that are particularly threatening to non-traditional lending products like title pledge lending. The Protecting Consumers From Unreasonable Credit Rates Act of 2009, authored by Sen. Richard Durbin (D-Il.), would place a flat interest cap of 36 percent on all consumer credit products. The House of Representatives is also considering legislation to create a new Consumer Financial Protection Agency (CFPA) that would have unprecedented authority to determine the types of financial products that consumers can choose.

From a broad perspective, usury regulations that impose caps on interest rates for certain types of loans tend to result in term re-pricing, product substitution, and credit rationing. Under term re-pricing, lenders offset limits of what they can charge on regulated terms by increasing the price of other terms of the loan or related loan products. Since the terms of a title loan are relatively transparent, this may be difficult.

Instead, title loans may be more susceptible to product substitution, which arises when a particular consumer loan product cannot be priced to be made economically feasible. Each consumer ultimately desires to hold a certain amount of debt based on income, saving preferences, and spending preferences. Restriction on auto title lending may force consumers into a less-preferred mix of credit by eliminating some loans that title lenders were previously willing to offer. In some cases, this substitution may lead borrowers to riskier debt instruments.

Restrictive regulations could lead to a scenario of credit rationing, in which lenders limit their supply of loans because it becomes economically impossible to make loans consistent with the regulation. In this case, it becomes impossible for certain borrowers to obtain formal credit, leading some borrowers to turn to friends and family or illegal loan sharks or to do without credit altogether.

A prime example of these adverse effects occurred in Florida, which was one of the earliest states to adopt title lending. In 2000, however, the state imposed severe interest rate ceilings on title loans.13 The number of auto title lenders operating in the state dropped severely, from 600 to 58 (see figure 1).14 And as mentioned above, such limitations may lead to a dangerous rise in bankruptcies and bounced checks. If auto title loans are severely constrained, low-income consumers may be limited in their availability to borrow from friends and family, who may come from a similar demographic. The answer, therefore, for many may involve illegal loan sharks and other dangerous avenues. This option is a very real consequence: A 2006 tightening of rate ceilings of consumer loans in Japan has also been correlated with a dramatic growth in illegal loan sharking in that country, primarily run by organized crime.15 Furthermore, while policy makers may seek to limit auto title lending to reduce consumer over-indebtedness, the effects of term re-pricing and product substitution will simply shift consumers to a different mix of terms (such as lower interest rates but higher up-front costs) or different, higher-cost products. In fact, one report concludes that interest-rate ceilings may exacerbate over-indebtedness by resulting in increased loan sizes and increased use of longer-term installment debt, which locks borrowers into less-flexible debt arrangements.16

American citizens and businesses rely on title loans for financial security and stability, and lenders are made up of a broad mix of Americans, each with unique risk and incentives. One-size-fits-all regulation is likely to be maladapted to each of these groups and will only hurt the consumers they are trying to help. The bottom line is that restrictions on auto title lending will eliminate an important funding option for many consumers, especially those of lower income, and will incentivize the use of more risky or dangerous credit channels. Auto title loans have proven themselves to be reliable and useful in the past; policy makers should weigh these low risks with the high benefits of this type of lending in making decisions for the future.

11. Skiba and Tobacman, "Measuring the Individual-Level Effects of Access to Credit: Evidence from Payday Loans."

15. Policis, Economic and Social Risks of Consumer Credit Market Regulation: A Comparative Analysis of the Regulatory and Consumer Protection Frameworks for Consumer Credit in France, Germany, and the UK (London: 2006), 47–49.