The ACA Is Not Making Healthcare More Affordable

The ACA has made health care spending less affordable relative to our economic resources, rather than more so.

Despite its name and despite some of the more grandiose claims by its supporters, the Affordable Care Act (ACA) is failing to make healthcare costs more affordable.  Indeed, it’s possible that the ACA has achieved less than nothing with respect to health cost affordability -- meaning less even than a hypothetical scenario in which it had never been enacted.

It’s well documented that national healthcare cost growth has slowed in recent years relative to longer historical patterns.  ACA supporters have been quick to credit the ACA for the slowdown, even though the deceleration preceded the law’s passage.  A good place to look to see the implications of healthcare cost growth is at the constantly-evolving cost projections for the Medicare Part B (physician services) program. (Medicare Part A projections are currently less reflective of national cost growth because the ACA aggressively restricts Part A reimbursements to grow more slowly than national health costs.  While the ACA also constrains Part B growth relative to national health costs, it does so to a lesser extent than it does Part A. Part D projections are also less telling because its participation estimates tend to vary significantly over time).

Figure 1 shows how projected Medicare Part B cost growth, relative to GDP, has changed in each trustees’ report since the ACA was passed in 2010.That’s a lot of closely-packed lines in one graph, so here let’s just say that projected Part B costs, relative to GDP, have gradually drifted upward since the ACA was passed.  To make this easier to see, I’ll strip out all of the intervening projections between 2010 and 2016 in Figure 2.

Followers of public policy debates could be forgiven for reacting with some surprise to the graph above, given that so much opinionating has been dedicated to the theme that health cost growth has slowed since the ACA was enacted.  It’s true that it has – but virtually everything else in our economy has been smaller than previously projected too, including tax revenue, price inflation, and overall economic growth.  It’s not so much that health care costs have come down separately as that virtually everything in our economy is smaller than we thought it would be a few years ago.  Unfortunately, relative to our GDP, this representative part of Medicare has actually not become more affordable.   To the contrary, the financial strains of paying for Medicare physician services now loom larger than when the ACA was passed.

Another good way to see current trends is by comparing estimates of the growth rate for National Health Expenditures (NHE) to GDP growth.  In plain English, this is just comparing the growth of health spending to growth in the economy as a whole.  This is what we really want to look at when discussing health spending trends, because it adjusts for how they might be masked by broader economic growth.

For example – if we had expected health spending to grow by 5% and GDP to grow by 3%, but instead health spending grew by 3% and GDP by 1%, the real story would be the slower growth in the broader economy, not slower growth specifically in the health sector.  Thus, we need to examine whether health spending relative to GDP has slowed compared to expectations when the ACA was passed.  Turns out it hasn’t.  Figure 3 compares data from the latest (2016) Medicare trustees’ report to projections from the 2010 report, published just after the ACA’s passage.

A quick glance at Figure 3 reveals that there has actually been no surprising drop in excess health spending growth (spending relative to GDP), compared with expectations when the ACA was passed.  To the contrary, NHE growth has exceeded GDP growth by more than was projected at the time of the ACA’s enactment.  Back in 2010, it had been expected that the economy would recover somewhat normally from the previous recession, so that health spending growth would barely exceed recovering GDP growth in 2010 and 2011 (see the blue line on Figure 3), while in 2012 and 2013 GDP would actually grow relatively faster than health spending (causing the blue line to dip below zero in those years).  Then in 2014 the ACA’s coverage expansion would kick in and excess health spending would rise again.

Instead our economic recovery was more sluggish than anticipated in 2010.  This fed into health cost growth also being less than expected, while GDP growth fell short of expectations by even more. The result has been that excess health spending has exceeded 2010 projections – not a result one would expect if the ACA is effectively controlling healthcare costs.

Complicating an evaluation of the ACA is the fact that the law itself has been found to retard national economic growth.  The Congressional Budget Office (CBO) projected that the ACA will reduce labor force participation by the equivalent of two million full-time workers by 2025, making total national labor supply roughly 0.86% smaller than it would have been in the ACA’s absence.  CBO has also projected that ACA repeal would increase GDP by an average of roughly 0.7% annually from 2021-25.

In other words, under the ACA, healthcare cost growth has not slowed as much as economic growth has – while the ACA itself has been found to be one of the reasons economic growth has slowed.  Considering all these factors together, the ACA has likely made health care spending less affordable relative to our economic resources, rather than more so.

Cost of Health Insurance Isn't All about Fairness

Pricing differences for women or people with chronic diseases are a reality. The question is where to set the line.

Impacts of the ACA on Small Business

How would your small business be affected if the ACA were repealed? 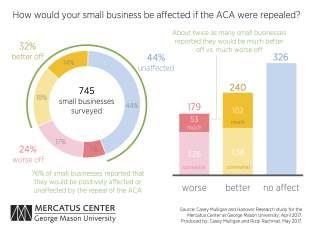 The Fiscal Effects of Repealing the Affordable Care Act