Healthcare quality can be measured in many different ways, but until now, there hasn’t been a comprehensive measure of the impact of states’ certificate-of-need (CON) laws on hospital quality. As of 2015, 36 states and the District of Columbia had these laws, which give government regulators final approval over new or expanded healthcare services, facilities, and equipment. Proponents of CON laws say these requirements improve hospital quality by allowing existing providers to improve their skills in treating the greater number of patients who necessarily seek care in the limited number of hospitals.

A new study for the Mercatus Center at George Mason University challenges this notion. Using a broad dataset, the study finds no evidence that CON laws improve hospital quality. In fact, there are more deaths and serious postsurgery complications in hospitals in states with CON laws.

CON Laws Lower the Quality of Medical Services
Hospitals in CON states perform worse than those in non-CON states on eight of the nine indicators in the study. For four of these indicators, the difference in performance is statistically significant. The only indicator for which CON states did better than non-CON states is postsurgery development of pulmonary embolism, by about four cases per 1,000 patient discharges.

CON Laws Are Associated with Higher Death Rates
The average 30-day mortality rate for patients with pneumonia, heart failure, and heart attack who were discharged from hospitals in CON states was 2.5–5 percent higher than that of their non-CON-state counterparts. The largest difference is in deaths following a serious postsurgery complication, with an average of six more deaths per 1,000 patient discharges in CON states.

Age, Income, Education, and Ethnicity Do Not Change the Results
The study focuses on specific Hospital Referral Regions where the demographic factors of age, income, education, and ethnicity are not systematically different on the CON versus the non-CON side of the border. Therefore, the difference in hospital quality between CON and non-CON states cannot be explained by demographic variations.

States with CON laws should consider the evidence that their regulations restricting healthcare supply may lower, rather than improve or even maintain, hospital quality. These states should also consider that repealing CON laws could save lives.

CON laws restrict entry into healthcare markets by requiring state regulators to vet the “community need” for new or expanded medical services. The National Health Planning and Resources Development Act of 1974 tied some federal healthcare funding to CON programs. At one point, 49 states had such laws on the books. But since the act’s repeal in 1986, several states have dropped their CON laws. In states that retain CON, regulators not only manage and monitor applications, they often set standards for the use of healthcare facilities and the number of permitted procedures. There is no scholarly consensus that CON laws improve hospital quality. Previous attempts to measure CON’s effect on hospital quality focused on single procedures rather than a broad scope on overall hospital quality. There is no existing estimate of CON laws’ causal effect on the quality of hospital services.

A NOTE ON METHODOLOGY

This study is the first known to use data from Hospital Compare to evaluate CON effectiveness. Hospital Compare is a database of more than 100 quality indicators from more than 4,000 Medicare-certified hospitals and is maintained by the Centers for Medicare and Medicaid Services (CMS).

40 Years of Certificate-of-Need Laws Across America

Forty years of peer-reviewed academic research—including the latest studies by researchers at the Mercatus Center at George Mason University—suggests that CON laws have not only failed to achieve their goals but have in many cases led to the opposite of what those who enacted the laws intended.

The State of Certificate-of-Need Laws in 2016

Since they were first instituted in 1964, certificate-of-need (CON) laws have experienced a number of changes over the past 52 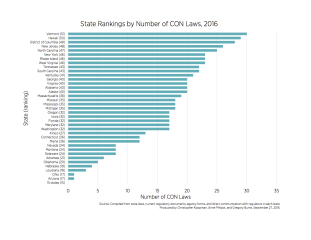 Can Health Spending Be Reined In through Supply Constraints? An Evaluation of Certificate-of-Need Laws

Certificate-of-need laws have largely failed in their original goal of reducing healthcare spending. In fact, costs are shown to increase in many states with such laws, while states that have repealed CON laws have seen overall healthcare costs fall. Rather than continue the expensive and time- consuming process of CON approval, policymakers looking to slow the growth of healthcare spending should instead repeal all CON laws.