In this paper we discuss three ways that states can benefit patients by making their health care markets more competitive: they can abolish certificate-of-need laws, liberalize scope-of-practice regulations, and remove barriers to telemedicine.

Well before the advent of the Affordable Care Act (ACA), the US health care system lacked many of the basic elements of consumer choice, price transparency, and efficiency enjoyed by consumers in other industries. The ACA, unfortunately, did not change this.

Most health care transactions take place without any reference to prices. Indeed, a large share of hospitals cannot even tell patients the price of a standard procedure.1 The market is hamstrung by a third-party payer model that divorces the consumer from choice. Moreover, it is limited by a patchwork of constraints that favor risk-averse insiders over innovative disruptors who might transform the system to the consumers’ benefit.2 The result is a system that lacks the sort of dynamic competition that permits other industries to discover innovative ways to improve quality, reduce prices, and enhance the user experience.3

In this paper we discuss three ways that states can benefit patients by making their health care markets more competitive: they can abolish certificate-of-need laws, liberalize scope-of-practice regulations, and remove barriers to telemedicine.

CERTIFICATE-OF-NEED LAWS
A certificate-of-need (CON) law requires anyone wanting to open or expand a health care facility to first obtain approval from a regulator by proving that the community “needs” the new or expanded service. As shown in figure 1, 35 states and the District of Columbia currently have CON laws.4 Though they vary from state to state, these laws cover everything from the construction of new hospitals to the purchase of new equipment. North Carolina’s CON law, for example, “prohibits health care providers from acquiring, replacing, or adding to their facilities and equipment, except in specified circumstances, without the prior approval of the Department of Health and Human Services.”5

As is often the case with health care policy, CON laws were devised as a means to overcome the unintended consequences of other government policies. Because Medicare and Medicaid reimburse providers on a fee-for-service basis, it was thought that these laws would prevent health care providers from ordering unnecessary and duplicative procedures.6 By this same logic, Congress enacted legislation in 1975 conditioning federal funds on the enactment of CON laws.7 Every state but Louisiana responded to the incentive and enacted a CON statute. Early studies, however, found that these laws failed to control costs.8 So Congress reversed course, repealing the federal incentive in 1986.9 Since then 14 states have repealed their CON laws.10

Providers were quick to realize that CON laws, which were ostensibly enacted to restrain costs, also restrained competition. In 1968, the American Hospital Association began campaigning for state enactment of CON laws.11 This is consistent with the public choice theory of regulation, which predicts that producers will favor—and often obtain—regulations that shield them from competition.12 During the CON approval process, incumbent providers are often invited to testify against their would-be competitors, and in many cases regulators have an explicit mandate to guard the profits of these incumbents.13 The approval process can be long and expensive. In Virginia, for example, Dr. Mark Monteferrante spent five years and $175,000 navigating the CON process to add a second MRI machine in his office.14

Today, CON laws are often defended as a means to promote care for the needy. Advocates argue that states offer providers this monopoly protection on the condition that the providers use some of their above-normal profits to supply care to those in need. Recent research, however, suggests that CON laws do not work this way.15 Thomas Stratmann and Jacob Russ examine data from 50 states and the District of Columbia and find that, while CON laws are associated with fewer hospital beds, MRI services, CT scanners, and colonoscopies, they do not correlate with any greater access to care among the needy.

One of the first steps a state can take to make its health care market more competitive—that is, more responsive to the needs of practitioners and consumers—is to repeal its CON law. SCOPE-OF-PRACTICE LAWS
Scope-of-practice laws are state-specific mandates that determine what tasks nurses, nurse practitioners, physicians’ assistants, and other health care providers may undertake in the course of caring for patients.16 As shown in figure 2, scope-of-practice regulations vary in stringency across states. New Mexico and Vermont, for example, are among the 18 states that allow nurse practitioners (NPs) to operate fully autonomous practices, meaning that they may be primary care providers and may diagnose, treat, and independently prescribe drugs.17 Other states, such as Virginia and North Carolina, only permit restricted practices, allowing NPs to be primary care providers but only under physician supervision.18 By restraining the supply of medical services, scope-of-practice laws have contributed to the shortage in primary care givers, a problem which is particularly acute in rural areas.19

The variability in scope-of-practice laws from state to state allows researchers to estimate the effects of these regulations. One recent study analyzes how these regulations affect wages, employment, costs, and the quality of certain types of medical services.20 The authors find that more stringent regulations limit the hours worked by NPs and that restricting NPs’ ability to write a prescription increases the cost of a well-child medical exam by about $16 (or 16 percent). Furthermore, the authors find that these regulations seem to have no discernable effect on outcomes such as infant mortality or malpractice premiums.21 The authors do find that scope-of-practice laws reduce NP wages while boosting physician wages.22 On balance, it seems that these regulations privilege certain providers under the guise of consumer protection.23

By allowing non-physician providers greater autonomy of practice, states could dramatically reduce the cost of care for their residents and increase access to care, especially for low-income families. If all states allowed NPs to practice autonomously without physician oversight, the total cost savings is estimated to be about $810 million.24

TELEMEDICINE
Telemedicine, or telehealth, is the remote diagnosis, treatment, and monitoring of patients by means of telecommunications technology. This form of delivery, which utilizes both current and developing mobile medical technologies, promises patients greater access, improved quality, and enhanced efficiency of care. Indeed, it may be the sort of disruptive technology that has ushered in dramatically lower costs in industries such as retail and air travel but has so far eluded the health care industry.25

Consider in-person dermatological consultations. The typical patient waits 29 days for an appointment.26 And on average these visits cost Medicare around $88.27 New smartphone and computer applications, however, permit patients to snap high-definition pictures of worrisome moles or bothersome rashes and within 24 hours they can get a diagnosis for $40 (or less if covered under a health network membership).28

This technology allows doctors to fill idle time by serving patients thousands of miles away. It can also allow patients in underserved (often rural) communities to access some of the best medical professionals in the country. Doctors and nurse practitioners could diagnose minor illnesses and treat patients with the help of already available mobile-compatible stethoscopes, otoscopes, thermometers, blood pressure monitors, and eye exam diagnostic tools.29

There are a number of mobile-compatible devices that either are on the market or are currently under FDA review that can run disposable diagnostic tests for strep A, Influenza A and B, adenovirus, and RSV using only saliva or a prick of the finger; devices that can test urine for preeclampsia, gestational diabetes, kidney failure, and urinary tract infections; and even ingestible biomedical sensors that can monitor medication adherence.30 Many of these devices are expensive now but experience shows that when patients internalize real prices, entrepreneurs find ways to lower prices. The price of a home drug test in 2015, for example, is one sixth the price it was in 2003.31 One can imagine a world in which it is common for families to purchase basic mobile medical kits for under $100 (or when they subscribe to a mobile diagnostic service).

Despite its promise, a number of policies stand in the way of this technology’s adoption. As shown in figure 3, 41 states and the District of Columbia have laws requiring doctors to perform in-person examinations before they may write prescriptions.32 Other states bar doctors from even making a diagnosis without seeing the patient in the office.33 And others discriminate against out-of-state providers.34 Policymakers should recognize that technological innovation has outpaced these 20th-century regulations and scrap those restrictions that stand in the way of competitive, quality telemedicine.

They should also acknowledge that differing scope-of practice regulations make it difficult for caregivers to operate in more than one state. These disparate regulations might be reconciled (and ideally eased) through an interstate compact similar to the driver’s license agreement, which would allow medical professionals to see patients in all participating states after going through a single licensure process.

CONCLUSION
The goals of health policy are not in contention. Nearly everyone would like to see a system in which patients enjoy access to efficient, innovative, low-cost, and high-quality care. With federal health care policy hopelessly mired in politics, states have an opportunity to make their health care markets significantly more competitive by repealing CON laws, easing scope-of-practice restrictions, and removing the barriers to telemedicine. A more competitive market is not simply a ticket to lower prices. Dynamic competition permits providers to be more nimble and innovative—better able to adjust to changing needs and to incorporate innovative technologies that improve lives.35

40 Years of Certificate-of-Need Laws Across America

Forty years of peer-reviewed academic research—including the latest studies by researchers at the Mercatus Center at George Mason University—suggests that CON laws have not only failed to achieve their goals but have in many cases led to the opposite of what those who enacted the laws intended.

In a new study for the Mercatus Center at George Mason University, scholars Robert Emmet Moffit and Neil R. Meredith demonstrate that while the MSP Program grants new power to the OPM by setting standards designed to limit entry into the program, the law may decrease competition and increase consolidation in the health insurance market. Decreased competition in the health care market may lead to higher prices for consumers of health care and could revive calls for a public health insurance option.

This paper suggests some potential policy actions to shift health care from Fortress to Frontier, and toward a goal of producing better health for more people at lower cost on a continuous basis.This research is available as an ebook for purchase at Amazon.com. 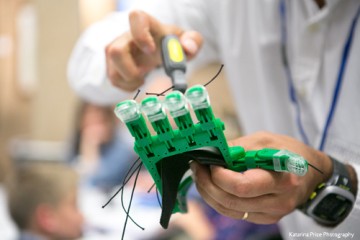