Louisiana Has What It Needs to Recover After Devastating Floods

A decade after Katrina, some might be tempted to ask whether Louisianans are capable of bouncing back from yet another devastating storm. But just as we saw then, the people have proven they have the strength and resilience to weather any storm.

Just a few weeks before the 11th anniversary of Hurricane Katrina, Louisiana once again fell victim to historic and devastating flooding. Approximately 30 inches of rain — more than half of the annual precipitation in the region and three times the rainfall total of Hurricane Katrina — fell on 20 parishes across the state in less than 24 hours. Tragically, at least 13 people have perished, with more than 20,000 people rescued from the floodwaters.

Yet unlike a decade ago, this story failed to capture many headlines in the days immediately following the storm. With so little attention, the governor and many residents worry they will not receive the donations and resources they need to rebuild. Local papers blasted President Obama for delaying his visit until Aug. 23.

As the water begins to recede, Louisianans face the emotional and physical challenge of rebuilding their communities in the wake of what the Red Cross declared “the worst natural disaster in the United States since Hurricane Sandy.” The Baton Rouge Area Chamber estimates $21 billion in damage to the Baton Rouge area alone — including more than 110,000 homes. Making matters worse, only 15 percent of affected households have flood insurance. All told, the total costs of this flood are expected to rival that of Hurricane Katrina.

On Aug. 14, Obama declared a state of emergency for the hardest hit parishes. Since then, FEMA, the National Guard and the Red Cross have descended upon the state to coordinate the response, providing resources to those in need. However, the unexpected nature of the storm coupled with the unprecedented devastation have overwhelmed recovery efforts. Many government-provided shelters across the Bayou State remain swamped and have had to turn people away.

A decade after Katrina, some might be tempted to ask whether Louisianans are capable of bouncing back from yet another devastating storm. But just as we saw then, the people have proven they have the strength and resilience to weather any storm.

After Katrina, Mercatus Center researchers interviewed hundreds of Louisiana residents who returned to rebuild their homes and way of life. Time after time, people referred to their families, neighbors, pastors and community leaders as being pivotal to their decision to return and ability to rebound. Private associations and churches often helped them gather needed resources and revive their communities.

Louisianans aren’t waiting for federal assistance now, either. Local entrepreneurs, volunteers and first responders are taking recovery into their own hands. Perhaps the greatest example is the “Cajun Navy,” an armada of local volunteers from all across the “Sportsman’s paradise” who deployed their own pirogues and tiny motorized boats to rescue thousands of people and pets stranded by the flood. The Cajun Navy didn’t wait for the National Guard or ask for permission from any top-down authority. They felt a civic obligation to help their neighbors. As one member toldABC News, “We are a people that stick together. [We] take care of our own.”

The community also received overwhelming support from a large number of local businesses, churches and other segments of civil society. Across the region, hundreds of churches and private businesses have been transformed into makeshift shelters manned by thousands of volunteers. And just like after Hurricane Katrina, private companies like Wal-Mart and UPS were among the first on the scene delivering much-needed supplies.

Help has also come in from neighboring communities. NOLA Pay It Forward, a nonprofit started in 2011 to help those affected by disasters, is collecting supplies and funds to send to Baton Rouge. Churches from surrounding states are sending volunteers and supplies. Even rival Southeastern Conference schools like South Carolina and Alabama stepped up to send aid in appreciation of the help they received from Louisianans during their own tragedies in recent years.

When faced with devastation, there are always stories of neighbors helping neighbors. Our research argues, as the events in Louisiana powerfully demonstrate, that it’s precisely the bottom-up efforts by local entrepreneurs, community leaders and ordinary individuals that drive a sustainable recovery. Large-scale government efforts may seem better suited to handle such large-scale crises, but as history repeatedly shows, these top-down efforts are often too late, too poorly managed and the most susceptible to being bogged down by political interests and bureaucratic red tape.

A prime example came when one Louisiana lawmaker proposed legislation that would strictly regulate the Cajun Navy by requiring that volunteers attain state training and certification before helping their neighbors. Instead, government officials should focus on removing barriers to recovery rather than adding new rules and regulations post-disaster, and should funnel resources to the local level where both citizens and government officials have intimate knowledge of the area and can act more quickly to adapting needs.

Once again, the spirit of Louisiana has provided a shining example of what it means to be a community that can rebound in the wake of hardship. The local community continues to show its remarkable capacity to come back stronger than ever before and should continue to be given the space and encouragement to act after disasters.

Community Revival in the Wake of Disaster

Rebounding after disasters like tsunamis, hurricanes, earthquakes, and floods can be daunting. Communities must have residents 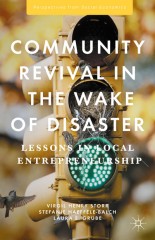 The products of the Mercatus Center Gulf Coast Recovery Project continue to flow. Research projects among graduate students and alumni continue in the area of the entrepreneurial market process, the constitutional level of analysis and strategic behavior within government, and the informal rules that enable social groups to engage in effective collective action. Below is a list of books, journal articles, and policy papers that are a result of this research program to date.

The Capacity for Self-Governance and Post-Disaster Resiliency 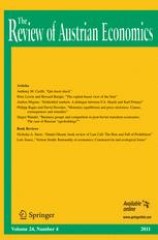