The Routledge Handbook of Anarchy and Anarchist Thought 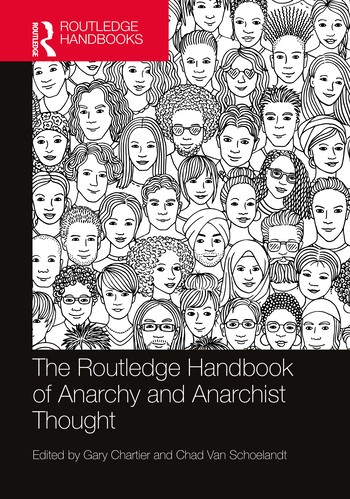 This Handbook offers an authoritative, up-to-date introduction to the rich scholarly conversation about anarchy—about the possibility, dynamics, and appeal of social order without the state. Drawing on resources from philosophy, economics, law, history, politics, and religious studies, it is designed to deepen understanding of anarchy and the development of anarchist ideas at a time when those ideas have attracted increasing attention.

The popular identification of anarchy with chaos makes sophisticated interpretations—which recognize anarchy as a kind of social order rather than an alternative to it—especially interesting. Strong, centralized governments have struggled to quell popular frustration even as doubts have continued to percolate about their legitimacy and long-term financial stability. Since the emergence of the modern state, concerns like these have driven scholars to wonder whether societies could flourish while abandoning monopolistic governance entirely.

Standard treatments of political philosophy frequently assume the justifiability and desirability of states, focusing on such questions as, What is the best kind of state? and What laws and policies should states adopt?, without considering whether it is just or prudent for states to do anything at all. This Handbook encourages engagement with a provocative alternative that casts more conventional views in stark relief.

Its 30 chapters, written specifically for this volume by an international team of leading scholars, are organized into four main parts:

I. Concept and Significance
II. Figures and Traditions
III. Legitimacy and Order
IV. Critique and Alternatives

In addition, a comprehensive index makes the volume easy to navigate and an annotated bibliography points readers to the most promising avenues of future research.

"This splendid collection invites us to look at the idea of anarchy and anarchism from a remarkable range of perspectives: historical, anthropological, and economic, as well as political and philosophical. The individual essays are invariably insightful, often provocative, and sometimes surprising for what they tell us about how people have managed to order their collective lives without turning to political authority. The volume as a whole has as much to offer those familiar with anarchist traditions as others coming to these ideas for the first time."
—Chandran Kukathas, Singapore Management University

"This Handbook surveys the history of anti-authoritarian answers to the basic questions of political philosophy. But the introduction and selections—notable for their clarity, precision, and expertise—also apply various forms of liberatory politics to concrete matters in the contemporary world, including climate change, mass incarceration, military technologies, and even transhumanism. The Handbook embodies a coherent, unified account of its subject-matter, demonstrating the continued relevance of a fundamentally challenging tradition. The provocations this potentially controversial volume offers, especially when protesters around the world are chanting ‘abolish the police,’ could not be more timely."
—Crispin Sartwell, Dickinson College

"The history and prospects of anarchism are misunderstood—and often misrepresented. There is a renewed interest in questioning the size and function of the coercive state, and mistrust of attempts at reform is growing. Surprisingly, there have been very few attempts to take stock of this broad, and sometimes contradictory, body of thought. The Handbook is the right book at the right time. Scholarly enough to be used by philosophers and political theorists, it is also a delightful and intellectually challenging resource for anyone who wants to understand anarchism as a movement."
—Michael Munger, Duke University

"This Handbook is an important and timely contribution to a vitally necessary discussion. New pressures on our inherited political institutions are distorting them in undesirable ways, whether these pressures come from climate change, from the growth of international corporate power, from truly global pandemics, or from globe-spanning terror networks. How can we arrange our political and social affairs such that they enhance human life while simultaneously avoiding or containing the horrific effects of inappropriate modes of organization? This volume offers a wide range of suggestions for our careful consideration."
—Jack Sanders, Rochester Institute of Technology

"Too much contemporary political philosophy still pays too little attention to anarchist thought. That neglect has always been surprising, not least because no other body of literature so comprehensively explores and challenges the theoretical and empirical foundations of coercive forms of hierarchy and their associated conceptions of justice and authority. Nowhere is the breadth and analytical depth of the anarchist tradition better represented than in the contributions to this Handbook."
—Hillel Steiner, University of Manchester

Gary Chartier is Distinguished Professor of Law and Business Ethics and Associate Dean of the Tom and Vi Zapara School of Business at La Sierra University. He is the author, co-author, editor, or co-editor of seventeen books, including Anarchy and Legal Order (2013), Flourishing Lives: Exploring Natural Law Liberalism (2019), and The Logic of Commitment (2018).

Chad Van Schoelandt is Assistant Professor of Philosophy at Tulane University. His work has been published in Ethics, Analysis, Philosophical Studies, the Philosophical Quarterly, and Law and Philosophy.

Part I: Concept and Significance

3. On the Distinction between State and Anarchy
Christopher W. Morris

5. What Is the Point of Anarchism?
Aeon J. Skoble

11. De facto Monopolies and the Justification of the State
Ralf M. Bader

23. Social Anarchism and the Rejection of Private Property
Jesse Spafford

26. An Anarchist Critique of Power Relations within Institutions
Kevin A. Carson

Find the full book at Routledge.

Economic Pathologies of the State

What is the appropriate role of the state? The list of desired activities that many people want the state to perform is

This Handbook offers an authoritative, up-to-date introduction to the rich scholarly conversation about anarchy—about the